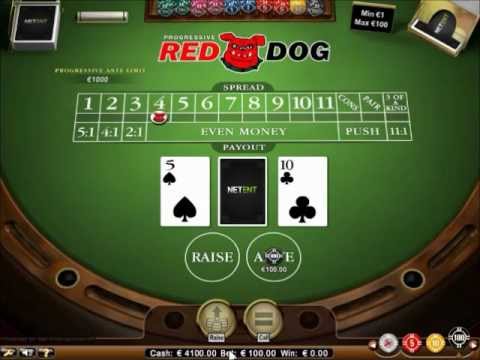 Red Dog Poker is played with standard 52 card deck. Some online casinos offer the game with more that one deck or up to 8 standard card decks. The game begins with an initial bet or ante bet placed by the players. When the bets are placed,all players are dealt two face up cards. There are three possibilities in the game. First,if the two cards are in consecutive order,example 7 Ã¢Â€Â“ 8 or 2 Ã¢Â€Â“ 3 the game is push and all bets are returned to the player. Second,if the two cards on the initial deal are the same value,example K-K or 7-7,then a third card is dealt to the player. If the third card has the same value creating a three of a kind hand,then the player receive 11 to 1 payout. If the third card doesn’t have the same value,then the game is push and the player takes his bet back. The third possibility in the game is when a player is dealt two cards that have different value and the cards are not in consecutive order,for example 7-10 or 2-9. In this case the dealer announces the spread. The spread is the number of cards that are in between the two cards dealt on the initial deal. If the player is dealt 5 and 9 on the initial deal there are three cards between 5 and 9 (or 6,7 and 8),thefore,it is a 3 card spread. Before a third card is dealt the player has the option to double his bet. If the third card is between two cards on the initial deal then the player receives payout according to the spread. One card spread pays 5 to 1. Two cards spread pays 4 to 1. Three cards spread pays 2 to 1. Every other spread pays 1 to 1.

Because Red Dog Poker is a very simple card game of chance the strategy is simple to understand. There is only one thing to remember when it comes to Red Dog Poker strategy. That is to make the raise bet only when there is a 7 card spread or more. Only when the spread is 7 or more the odds favor the player. If you decide to make raise bet on 6 card spread your chances of winning are 46%. You can find out more on this site if you are looking for more information on poker.

Scroll back to top